Drill bits are cutting tools used to create cylindrical holes, almost always of circular cross-section. Drill bits come in many sizes and have many uses.

Bits are usually connected to a mechanism, often simply referred to as a drill, which rotates them and provides torque and axial force to create the hole.

Drill Bit – SHANK
The shank end of the drill bit is the end by which the bit is held and driven.

3-Flatted Shank - Generally 3 flats designed to allow a strong chuck grip on the shank. Reduces the possibility of the drill slipping in the chuck during tough drill applications.

Tanged Shank - This style of shank is used with a split sleeve drill driver as a replacement for taper shank drills.

Shank — The part of a drill by which it is held and driven.

Washout — The extreme increase at the end of the flute, formed by the grinding wheel or cutter.

Web Increase — The web thickness increases in thickness towards the shank to enhance the rigidity of the drill.

Drill Bit – BODY
The drill body is that portion of the drill that extends from the shank to outer corners of the cutting lips.

Drill Body — Portion of the drill extending from the end of the flutes to the outer corner of the cutting lips.

Drill Axis — Imaginary straight line that forms the center line of the drill.

Back Taper — Slight decrease in diameter from point towards shank, in the body of the drill.

Body Diameter Clearance — The portion of the land that has been cut away so it will not bind against the walls of the hole. 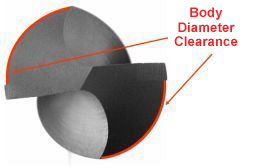 Neck — The section of reduced diameter between the body and the shank of a drill.

Flute Length — The length from the outer corner of the cutting lips at the point (shoulder) to the extreme back end of the flutes. Example Measurement: 2-11/16"

Flutes —Grooves formed in the body of the drill to provide cutting lips, to permit removal of chips, and to allow cutting fluid to reach the cutting lips.

Out-of-Round — Not round. If caused from centerless grinding, the part will usually have 3 lobes. 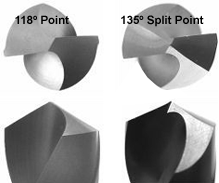 Point — The cone shaped cutting end of a drill, made from the ends of the land and web.

Cleared Diameter —is measured using a micrometer over the diameter of the cut away portion of the drill lands.

Cutting Lip — The cutting edge of a two-flute drill which extends from the chisel edge to the outer edge. 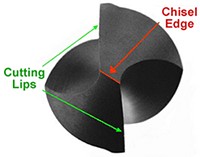 Secondary Cutting Edge — The cutting edge formed by the intersection of the face of the notch with the relieved surface of the point, resulting in partial removal of the chisel edge.

Drill Diameter — The diameter over the margins of the drill measured at the point.

Land — The outer portion of the body between two adjacent flutes.

Lip Relief Angle — The relief angle at the outer corner of the lip.

Margin — The narrow portion of the land which is not cut away to provide clearance. It stabilizes the drill in the hole.

Web Thickness — is measured by using a point micrometer positioned at the point end.

Web — The central portion of the body that joins the lands. The extreme end of the web forms the chisel edge on a two-flute drill.

Our products are only sold through distributors. Please contact customer service 1-800-328-4655 to find the nearest distributor.